Eyes Were Removed
Greta is one of the many antagonists that appear in Emily Wants To Play Too.

Before the game, Greta Von Thunberg was the doll of a little girl living at 781 Hillpark Drive with her parents. One day the entire house burned down with all the residents inside due to a faulty electrical circuit igniting highly flammable polypropylene clothing, which is the much more flammable choice of material than environmental friendly material clothing, starting the fire. Greta was the only object that wasn't destroyed by the fire. She was taken and stored, and the analysis shows that she was made of a flame-retardant material and that her eyes were removed before the fire occurred. Upon further scrutinizing, it is observed that there are several spots on Greta's back that were untouched by the fire. Each of these undamaged markings resemble English alphabets. Which combined into the phase "How Dare You?"

Greta is first encountered in the Level 1 area at 8 PM. She will continually cry out "mama" while searching for the player. Since Greta's eyes have been removed, she cannot see, making her rely on noises to locate the player. If the player makes any loud noises, such as sprinting or interacting with doors, she will hear the player and run in the direction of the noise. If she catches the player, she will immediately jumpscare them.

Greta resembles a baby doll, although with several black markings on her due to suffering fire damage. Her eyes were removed before the fire, although her model makes it look like she has completely black eyes in some cases. These could also just be burned eyelids. She wears a black dress. 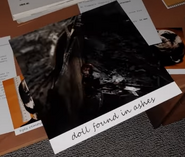 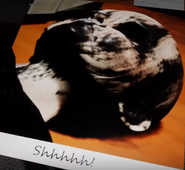 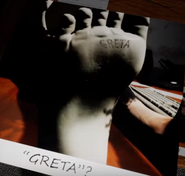 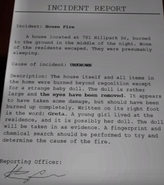 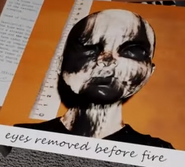 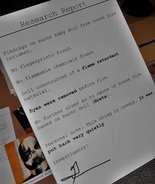 Greta in area 1
Add a photo to this gallery
Retrieved from "https://emily-wants-to-play.fandom.com/wiki/Greta?oldid=5921"
Community content is available under CC-BY-SA unless otherwise noted.