Black
Kiki is an antagonist in the Emily Wants To Play series.

Before the game, Kiki was a porcelain doll belonging to a puppet master named Vult Ludere. Ludere used dolls to entertain children during his shows. She was a part of a group of four dolls, Mr. Tatters being one of them. According to the local journal, people started to disappear after Ludere's shows, stating that 12 people already went missing. It is unknown what happened to Ludere, however, Kiki fell into the possession of a girl whose father was a mayor. The mayor's daughter, (as well as many others) eventually died from the disease known as Cholera. There was a large outbreak, and Kiki was assumed to be contaminated.

Kiki came into ownership of another girl named Emily. She also welcomed Chester and Mr. Tatters and the girl loved the three of them instantly calling them "her friends". After the doll's arrival, Emily's behavior started to change, causing her parents to feel deeply disturbed. Emily eventually died of an unknown cause, and the dolls began to appear in random locations of the house. Emily's parents died while preparing to move out.

Kiki becomes active at 12 AM. Her game appears to be peek-a-boo. She will giggle when appearing behind the player. When Kiki appears, the player must locate her, then stare at her until she disappears. Do not look away from her for too long, or else she will come closer. She then eventually tags you, ending the game. In some cases, the player can monitor Kiki as they leave the room, but there's always a chance that she will follow you and have a great chance of tagging you, resulting in a game over. Sometimes when appearing, Kiki may cut off the lights in the room similar to Mr. Tatters, but she will do it much more often. Kiki is inactive for 11 PM, 2 AM, and 4 AM.

Kiki can first be seen in the dream. Her behavior is identical to the first game with some key difference: her laugh has been updated. Kiki is active once the player reaches the warehouse in level area 2.

Kiki is a porcelain doll with very light gray skin and black hair that appears to be a bob cut. She wears a long, black dress with a V-neck. She appears to have a hollow mouth with black lips and sports black ballet shoes. 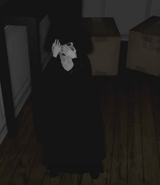 Kiki as she appears in Emily Wants To Play

Kiki in the hall 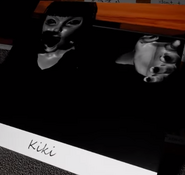 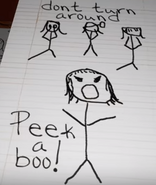 Kiki performing a ritual on Max.
Community content is available under CC-BY-SA unless otherwise noted.
Advertisement