The Pizza Delivery Man is the unnamed main protagonist of Emily Wants To Play, controlled by the player.

Very little is known about the player character, other than the fact that he is male, appears to be relatively young (he sounds as though he's in his late teens or twenties) and works as a delivery man for Checkers Pizza.

The pizza delivery man brings a pizza to the house late at night, only to discover it is apparently empty. He finds himself locked in and upon investigating, finds a number of disturbing notes and recordings. As time goes by, he finds himself stalked by three apparently 'living' dolls, Chester, Kiki, Mr. Tatters, and a ghostly little girl. He must find a way to evade them until dawn arrives and he can escape. After the player has made it past 6:00 AM, a news reporter will report that the pizza delivery man is currently in psychiatric evaluation as police investigate the house. Right at the end of the cut-scene this unknown person goes into Emily's parent's bedroom and into the secret entrance to the basement and the box of the dolls are in the secret entrance to the basement hinting towards Emily Wants to Play Too.

A file appears in the 2nd game where the accident about the dolls is told. It is also speculated that the man reading the story of the Sandwich delivery man, that happened during the game, is hinted to be him. The man suggests that he should "go back to that house", possibly hinting towards a third game. 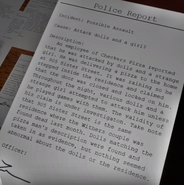 Police report
Add a photo to this gallery
Retrieved from "https://emily-wants-to-play.fandom.com/wiki/Pizza_Delivery_Man?oldid=5150"
Community content is available under CC-BY-SA unless otherwise noted.