Emily wants to play Wikia
Register
Don't have an account?
Sign In
Advertisement
in: Templates, Antagonists, Characters,
and 2 more

Male
Vult Ludere, (also known as the puppet master) is a possible antagonist in Emily Wants To Play Too. He was the former owner of Kiki, Mr. Tatters, and Chester.

Ludere used to be called the puppet master, entertaining children during his own shows with his dolls. He owned four dolls, two of them were a porcelain doll named Kiki, and a clown named Mr. Tatters . According to the local journal, people started to disappear after Ludere's shows, stating that 12 people already went missing. It is unknown what happened to Ludere, but Mr. Tatters destroyed a circus and found a puppet named Chester who belonged to a ventriloquist. Kiki became the doll of a mayor's daughter and started to spread the disease, Cholera. The three dolls later went to another girl named Emily, the girl loved the three of them instantly calling them "Her friends". After the arrival of the dolls, Emily's behavior started to change.

Ludere's past is mentioned in a journal found on a secret room's table. The protagonist learns that he used to be a puppet master and owned dolls like Kiki and Mr. Tatters, to perform shows for the children. The journal also mentioned the missing people.

Ludere human form is unknown but his monstrous form can be guessed at the end of the game. Although it is possible that he was speaking through the dolls, and the tall man at the ending of Emily Wants To Play Too was actually Weasl.

An article about Vult Ludere's show 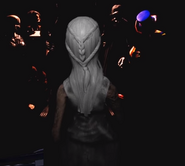